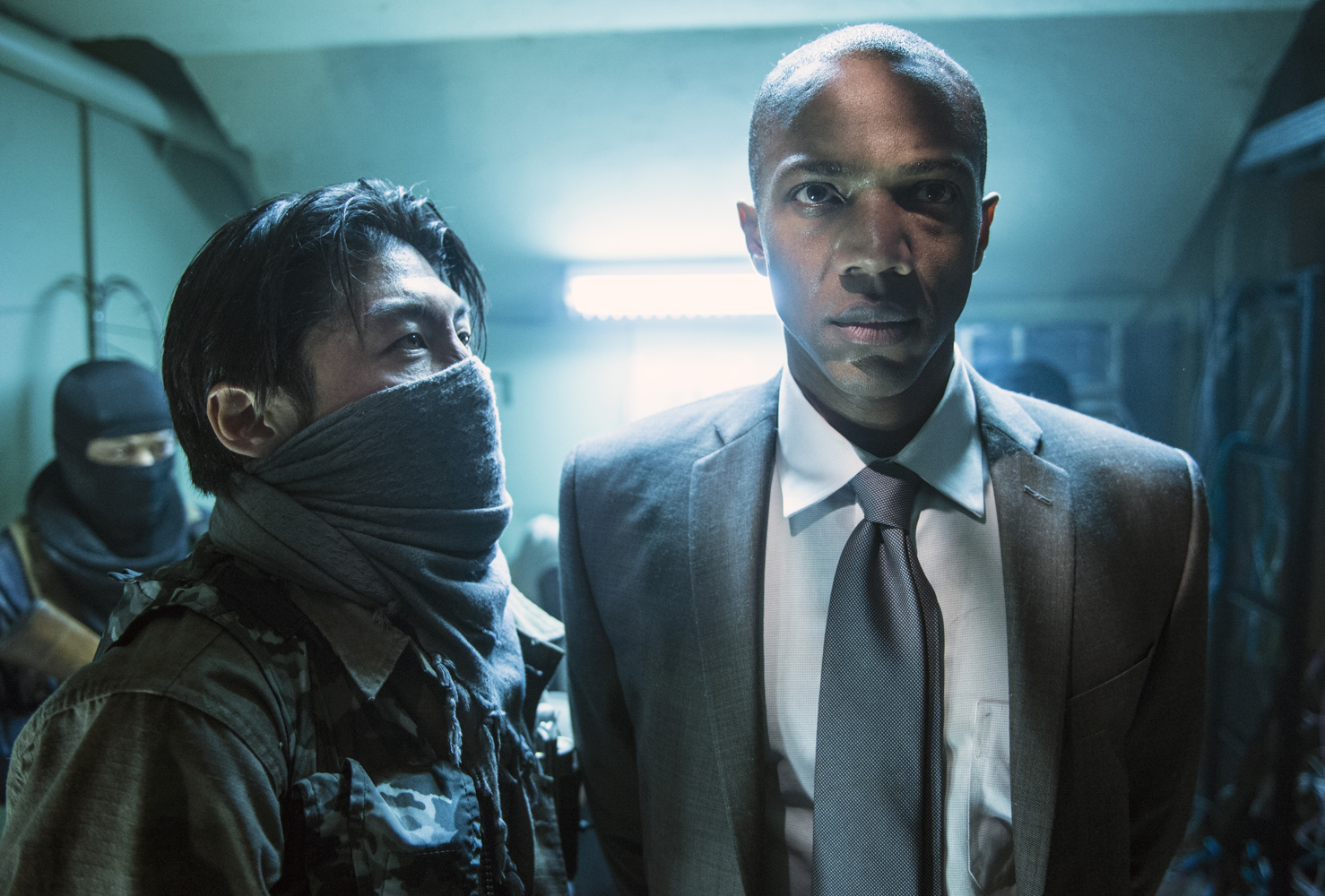 Screw the greater good. This episode is all about negotiating for personal interests and driving us crazy with suspense and anticipation. There are two major things happening in The Lottery, and neither of them have to do with the infertility.

It’s day two of the hostage situation and Vanessa is a crumbling tower barely hanging on. With Nathan facing death, she enters into negotiations with a Shanghai-based terrorist group called the New Maoists. They want five of the fertilized embryos but, as I mentioned before, the Prez isn’t willing to give any away. There’s lots of debate about what course of action to take as this particular group of terrorists has a pattern of kidnapping Westerners, making outrageous demands, and killing the hostages anyway.

Vanessa conjures up a plan to save the delegates themselves when she notices Nathan mouthing something on a video. BRING IN THE LIP READER! THe lip reader tells White House staff that Nathan was giving the location. Okay, so we can swoop in and save them, right?

Nope. When the SEALs are sent in, they find nothing and no one. Vanessa stresses over what the hell happened when she gets another one of her brilliant ideas to negotiate using animal embryos instead of the human ones. The plan fails when she aims too low, offering two. Why would she do that?! These New Maoist are having no parts of Vanessa’s games. They shoot one of the delegates. Luckily, it isn’t Nathan, but negotiating is pretty much off the table at this point.

Vanessa is advised to halt communications with the terrorists to save the formidable reputation of the United States. It is this reputation that deters other radical groups from attempting to harm the U.S. This decision results the execution of all the delegates.

Allegedly. Orphan Black has made me very suspicious.

A conversation between sketchtastic Darius and New Maoist leader Ziyou (Brian Tee) leads me to think otherwise. They were working together the entire time! Even if Vanessa hadn’t screwed up the embryo negotiation, she was bound to lose from the start. It doesn’t make the heartache ease any bit on Vanessa’s end. Of course, she doesn’t know anything about Darius’ involvement in the hostage situation. She mourns the “death” of Nathan and there’s only an insanely cute video left of their top secret relationship, so it looks like she’s going to suppress, suppress, suppress, then break down. 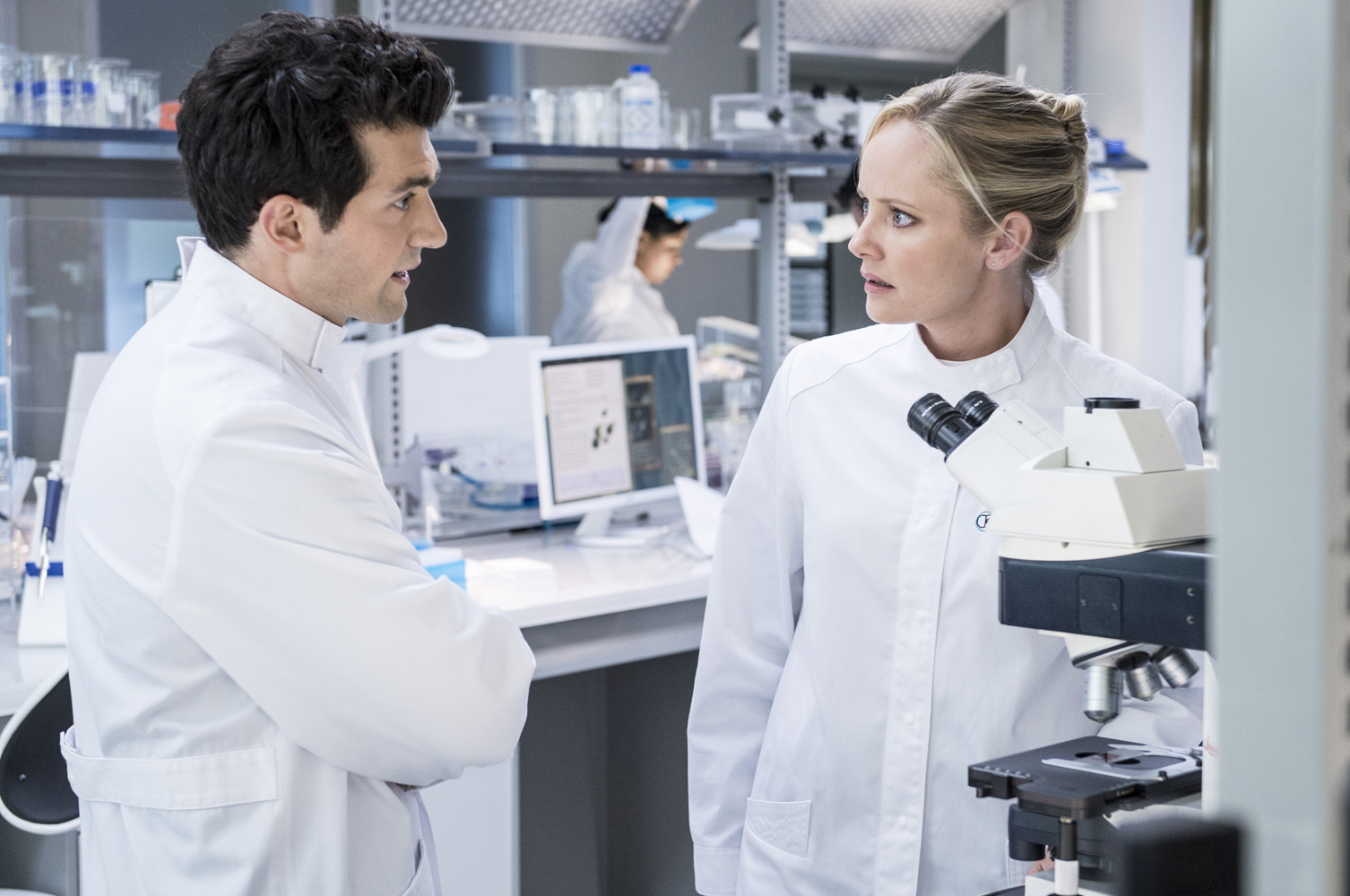 Things may be faring better—well, less awfully—for Kyle. After a spin in the sheets with Camille (I knew that was going to happen. It was all that eye contact), Kyle meets an old army buddy. He wants to get passports for Elvis and himself, so that they can cross the border into Canada. Good plan. Might’ve been better if it had worked.

The old army buddy holds a dangerous grudge, and the Department of Humanity shows up at Camille’s place, leaving Kyle and Elvis with nowhere to run. Elvis is taken away and Kyle is being held in custody.

On Alison’s end, she records a creepy commercial to advertise The Lottery. I think it might be her eyes. They’re just a bit too big, a bit too eerie, like she’s staring into my soul. Anyway, she’s clearly risen to fame because even the commercial’s director wants her to sign a baby doll. Yeah, it’s weird, but people in this dystopia have taken, well, weird to a whole new level. 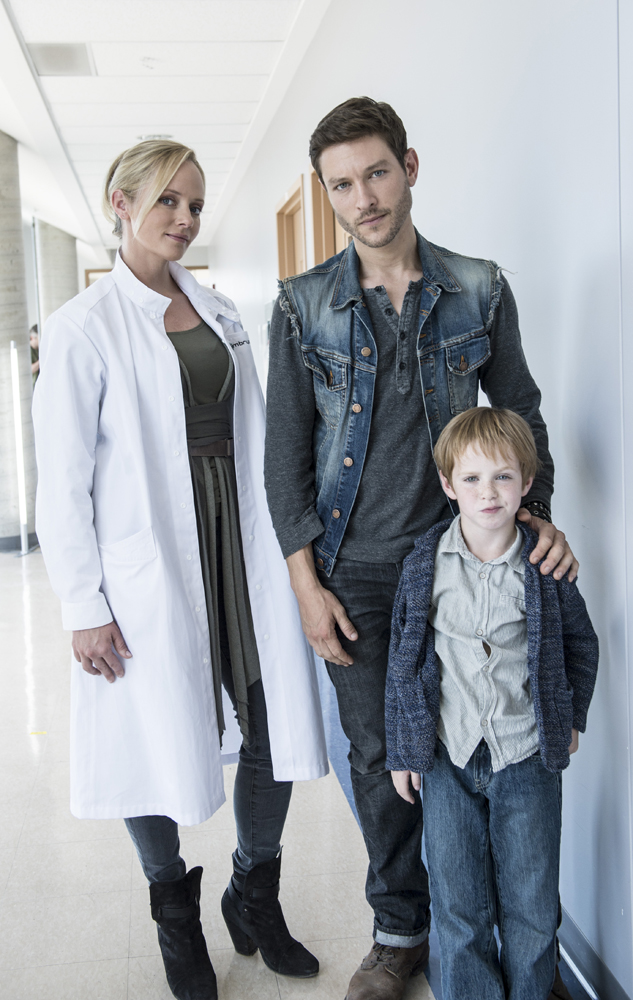 But super-fans are the least of the doctor’s problems. She has to figure out how she managed to fertilize that first batch of embryos. Convinced that Kyle is the key, she jumps on the opportunity to meet him when news is released that he’s been captured. She manages to have Kyle released, but come on. You gotta milk the cow! He insists that Alison won’t get a single bit of his man juice until he gets Elvis back.

She talks with Vanessa and does the best that she can: visitation and the abduction charges dropped, but Vanessa couldn’t get out of the custody hearing. Kyle caves and gives up the goods but, after repeated attempts, the scientists are unable to fertilize anymore embryos using Kyle’s sperm. After running further tests using Kyle’s blood, they discover that he actually has the freaking Bubonic Plague. What?

You mean to tell me that in the year 2025, there’s still the Black DEATH. First of all, how is this man even still alive? Why isn’t he rotting inside out? Where are the tumors popping up on his skin or the necrosis on his limbs? Why does he look smoking hot? And isn’t that contagious? Like epidemic contagious? Like, shouldn’t you go check and quarantine all of those women he had sex with over the last six years? I mean, come on, the Bubonic Plague? What, Lifetime? What?

Anyway, Alison’s being followed. The guy probably intended to kill her until some other guy killed that guy. I’m calling them “guy” because neither of them have names yet. You think the government would put her on the list for Secret Service protection and hire some guard?