(A-Z of Science Fiction Characters will be a twenty-six week-long, personal opinion series, showcasing only a handful of the best characters in science fiction television. I say “handful” as there are numerous science fiction characters to choose from, however this series will show a large variety of characters.) 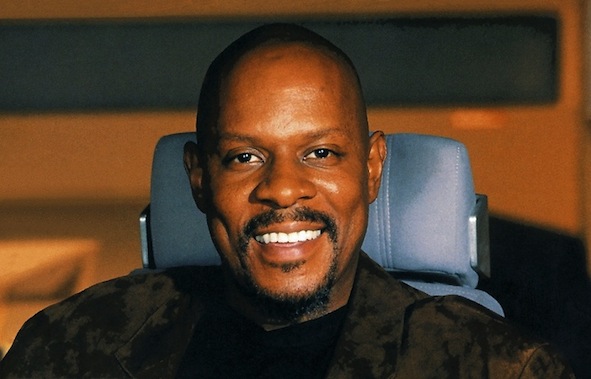 When the incredible, not-so-black-and-white Star Trek: Deep Space Nine began airing midway through the sixth season of Star Trek: The Next Generation, viewers of the franchise were introduced to a strategic, take-charge man by the name of Benjamin Sisko. Starting out as a Commander before being promoted to a Captain, Sisko played a huge role in the Dominion War. In addition, Sisko was labelled the “Emissary” by the Barjoran population. Benjamin Sisko was, at heart, a passionate and caring single father, who led a diverse and dedicated crew aboard an immobile space station in the Alpha Quadrant during times of war.

First Appearance: The first episode of Star Trek: Deep Space Nine season one, “Emissary”, successfully welcomed viewers to a strong-minded, dedicated Starfleet Commander Benjamin Sisko, who was also a nurturing single father. He was a strategic and authoritative man like Captain Picard, but additionally shared that adventurous, take-charge attitude that Captain Kirk possessed in the original series. This combination of traits was seen once a stable wormhole was discovered and he ventured in personally, coming into contact with what were known as the Prophets. It was from here that the Barjoran population considered Sisko to be the Emissary.

Best Appearance: There are numerous episodes in which Avery Brooks gives an absolutely stellar performance as Benjamin Sisko, however “In the Pale Moonlight”, the nineteenth episode of the sixth season, was one of his most powerful ones. In this episode, Sisko and the Cardassian ally, Garak, attempt to convince the Romulans to join the Federation and fight against the Dominion. Yet, after their original plan fails, Garak persuades Sisko to manufacture some fake evidence to convince them. Though knowing this is morally wrong, Sisko goes through with this, rationalising it by saying that the Dominion would eventually invade Romulus, so the only way to save them would be to bring them into the war beforehand.

Why Benjamin Sisko Is Such a Good Character: Benjamin Sisko was one of the best, multi-layered characters in the Star Trek franchise: a strategic leader, a dedicated Starfleet officer, an incredible cook, a nurturing father, a loving man and a determined, take-no-prisoners soldier. His involvement in the problems associated with the space station’s inhabitants was limited, but he based the entirety of his decisions on their well-being, as well as strengthening the Federation that he was so devoted to.

Final Thoughts: During the opening episode of Star Trek: Deep Space Nine, I was unsure whether or not I would grow to like Benjamin Sisko. It definitely felt as though Avery Brooks was overacting in certain scenes, especially when the episode did a flashback to where his wife, Jennifer Sisko, had died. But I think that this was strongly contributed to the fact that he was still finding his footing. However, as the series continued, Brooks transformed Benjamin Sisko into an engaging character through his powerful and dramatic performance.