It should be said outright that I am a massive Doctor Who fan. I’ve seen every episode of the new series at least once, and most of them more than three times. I like every Doctor and I like every companion. I own a sonic screwdriver and the background on my computer is the T.A.R.D.I.S. in the snow. I’m telling you this so that you understand that I am biased. I am super, duper biased. From just the sheer fact that this is a music video about Doctor Who, my higher brain functions shut down and I turn into a fanboy.

SQUEE! OMG SQUEE!!!! All the references! I can has all the references!? They translate all the words into High Gallifreyan! Is that an Adipose? Is that the Lonely Child! OMG they have an anti-pear symbol! Look, look, it’s River Song! OMG! OMG! SQUEEEEEE!

All right. Thank you for letting me get that out of my system. I shall now review this music video with all the grace of a professional.

He did the dance from the Ponds’ wedding! SQUEEEE!!!

Okay…okay. I’ve got it under control. From here on, I will treat this like a Cyberman would: with cold, unflinching logic.

It’s obvious from the first frame of this video that it was made specifically for Doctor Who fans. The shear amount of references alone is a testament to that. From the white cutouts of familiar objects and villains, to the choice of fonts for the lyrics, this video is so saturated with Whoivian sensibilities that it feels like it’s from the BBC. Just the fact that this exists is such a good sign of things to come. “The Hanging Tree” from The Hunger Games is already a popular song on the radio, so why not songs from other fandoms? It’s not that big of a stretch to expect in the near future a station entirely devoted to songs like this. 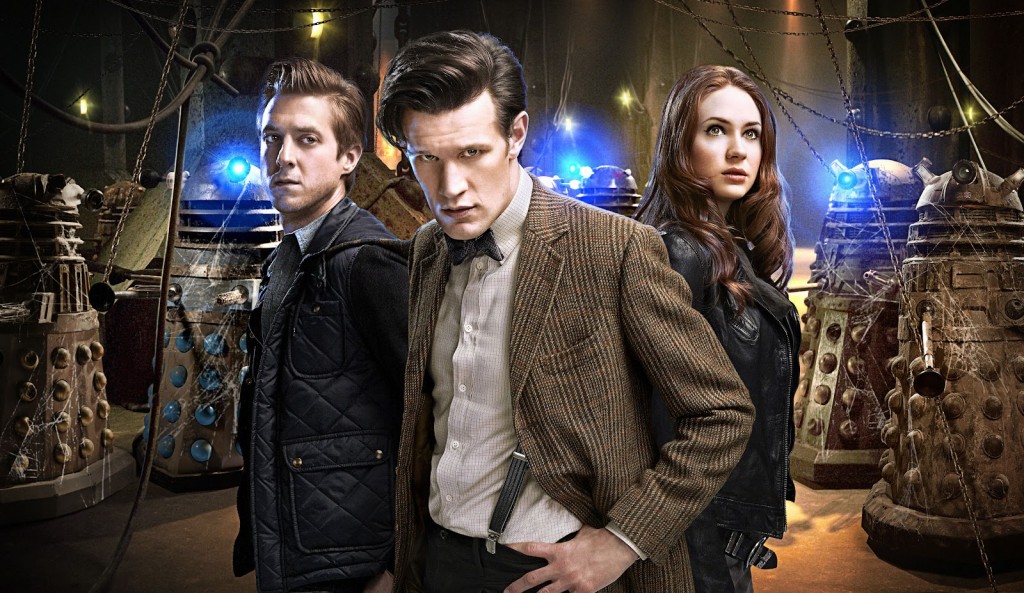 With that said, this song is not just a fan piece, but also a pop song, and it has all of the problems that goes with that. I didn’t notice it the first time I listened, but after repeating it a few times, it became apparent that, despite all the cool visual references and the energetic beat, the song was a tad repetitive. The chorus consists of only really two sentences, and they are repeated just a little too often. The song is more than four minutes long, and that might be the cause of all of its faults. The words used are good, but not compelling enough to stretch over that long of a time without coming off as a bit boring. I am quite willing to admit that some of that opinion might only exist because I listened to the song several times to prepare myself for this review. Perhaps with the normal occasional listen this might be more downplayed, but it’s a problem nonetheless.

Something I did like about it was the pace. The thing that I like about pop songs, and the reason I don’t normally decry it as a genre, is the fact that they do not wallow in their words. Even slow pop songs know that they need to bring the listener to the crescendo, then bring them down, then crescendo again. If they’re especially bold, they will sometimes do this up to five times. But the point is always to get the listener to those fist-punching, sing-at-the-top-of-your-lungs moments. For me, at least, that is the mark of a good pop song, and this does achieve that. I’m not ashamed to admit that I was singing “somebody call the Doctor” right along with the chorus by the second listen.

The entire song is based on the idea of wanting to run with the Doctor, and the song and video both encapsulate that dangerous, joyous, and frenetic desire. It offers us another option, besides the show, to feel the pulse rush that every Whovian dreams of getting to experience one day, the day we finally meet the Doctor.

This music video is like the T.A.R.D.I.S.: a bit clunky at times, but ultimately brings us right where we’re supposed to be.