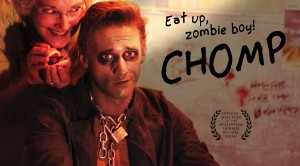 Today, I was fortunate enough to get to see a special private screening of the short film “Chomp”, directed by Lynne Hansen. A horror-comedy piece that seeks to make fun of all the zombie media that has come out as of late, it lampoons it with the campy story of a man who is mistaken for a zombie by an obsessed woman who is soon after trapped in her garage in an attempt to prove to the world that the undead exist. This marks, perhaps, the only horror movie where a human is more dangerous than the actual monsters.

This film is unabashedly a comedy, and in its efforts to get you to laugh it really only has two settings: acting so overblown that it becomes hilarious or subtle jokes in the background. The second is what I enjoyed most about the movie, as it makes rewatching a lot of fun. The majority of the film takes place inside a locked-off garage with the windows boarded up, the walls covered in maps. I adore the attention that went into each of those maps, as they all have insane statements scribbled across them, one even going so far as to just have the words “DOOM” scrawled across an area. Details like these really show just how much the cast and crew cared about the film, and how much love went into it.

Speaking of the cast, every hat in the room must give a tip for the character of Millie, played by the hilarious Susan O’Gara. 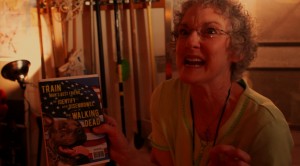 She steals the show with a performance that swings between Annie Wilkes (from Stephen King’s Misery) and the Trunchbull (from Roald Dahl’s Matilda). The actress is clearly having an absolute ball playing her, and it radiates off into her performance, managing by the end of it to reduce me to giggles whenever she did one of her stares at the screen. Her dialog is also a lot of fun, as she will simply not accept the fact that he is not a zombie, and goes to enormous lengths to prove her own delusions. Telling anymore would border on spoilers, but the ending scenes take it to the ultimate conclusion. From this alone I, in all honesty, would not mind watching a entire horror movie just about Millie.

The rest of the cast, though small in number, also does an admirable job. The main character, Kyle (played by Kyle Porter), is really good at facial acting, making even the scenes where he doesn’t talk subtly funny, as he just continues to try to get out of the madness he’s found himself in. The other major character is Dr. Jon Croft (played Joel D. Wynkoop), who does not have much screen time but manages to communicate everything we need to know about him in through just his presence and delivery. He came off as what would happen if the Zombie Survival Guide author, Max Brooks, actually believed in what he was talking about. Special mention must also go to Ellah Durliat, who only shows up for a moment, but manages to steal the entire scene with her performance.

The movie is just a clever little piece that, though created by a small production crew, has enough heart to carry it through any hiccups that its low budget causes. It takes a campy and hilarious look at what zombies can do to us without even biting. I cannot thank Lynne Hansen enough for allowing me to view it.

I look forward to seeing what else you have in store.

For more information on the upcoming film, including the cast and crew, you can like them on Facebook at Facebook.com/ChompMovie

If you enjoyed Brandon’s piece, you can find more of his work on his website, Coolerbs Reviews. You should also take a look at his many short stories in our Friday Fiction category.