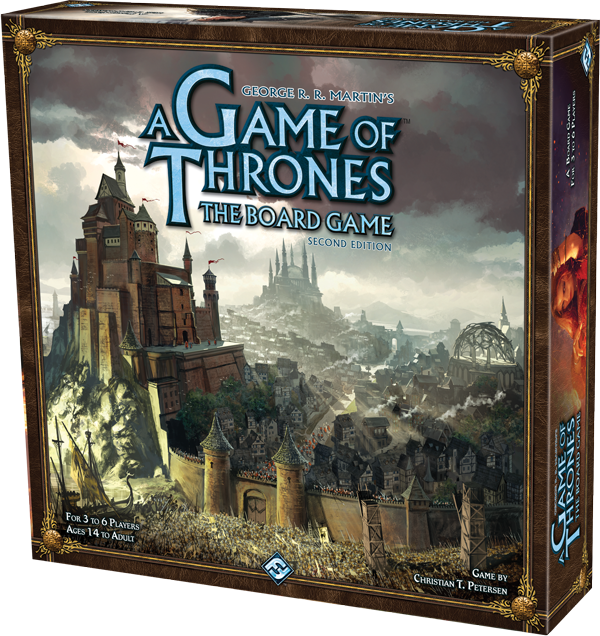 A Game of Thrones The Board Game was originally released in 2003 by Fantasy Flight Games.  A second edition was released in 2011.  The game follows the events of George R. R. Martin’s popular tale.  Each of the three to six players takes control of one of the six powerful houses present in the Seven Kingdoms. Each player then strives to control strongholds and castles.  Once a player controls seven of them, then they win the game immediately.

This game is a strategy game that has no luck involved unless the players vote to use the cards that add luck to the battle.  Players move their different units using orders.  Every player places all of their orders face down on the board at the same time and then they are revealed.  When one player initiates a march order into an opponent’s territory, battle begins.  The strength of the two forces are calculated, including the strength of supporting units.  The each side plays a house card.  This card represents a leader of that faction.  Each house card has a different combat strength and abilities, allowing for a lot of strategy to go into choosing which card to play.

This game also takes influence into account though.  Sometimes, the different houses will have to bid for position on the three different influence tracks.  These are the Iron Throne, Fiefdoms, and King’s Court track.  Each one provides different bonuses.  The Iron throne track determines turn order, and whoever is number one on it receives the Iron Throne token, which allows them to decide all ties in the game.  The Fiefdoms track determines who beats who in case of a tie in battle.  Whoever is number one on this track get the Sword token, which can add one to your combat value once per round.  Lastly, the King’s Court determines how many special order tokens each house can use (Special order tokens are beefed up versions of regular order tokens)  Whoever is number one on the King’s Court track gets the Messenger Raven token, which allows you to change one of your order tokens after they all have been flipped up.

This game functions very well.  You can muster troops for every castle and Stronghold you own, and you can only field armies that your supplies will allow.  Unfortunately, mustering troops and reconciling supplies doesn’t happen often enough, so I changed the rules in order to do it every round.  Doing this will make the game a lot more fun and a lot less frustrating. (Trust me)

I would recommend this game to any strategy boardgame fans, as long as they change the rules I mentioned.  It’s a lot of fun and the ability to make alliances at any point with anyone  adds another layer of fun.  It’s a pretty long game though, so make sure you have people who can last long enough to enjoy it, otherwise you’ll have a hard time.  For more information on it, look it up on Fantasy Flight Games’ website.  Have fun!