It wouldn’t be Thrones off-season if there weren’t a few rumors floating around. Sure there are those rumors that Lady Stoneheart will finally make an appearance, but until we see her on the screen I will no longer hold out hope. However, we’re not talking about those rumors. No, we’re talking about a completely whacked fan theory from Reddit that gained major news traction recently. Hold on to your Valerian steel people, this is a doozy.

It’s no big secret that there’s an “R+L=J” theory. That’s Rhaegar Targaryen and Lyanna Stark equals Jon Snow, the little bastard that could. Rhaegar is the brother of Daenerys and Lyanna is the late, great Ned Stark’s sister. However, recent rumors all started with a wise Redditor, ghostchief, and his theory about season six’s premiere scene. He explained that the opening could be Ned by Lyanna’s side as she passes away while giving birth… To a baby girl. Baby girl?! You say, well that throws a wrench in the whole theory. Except it totally doesn’t.

You see this scene would probably take place at the Tower of Joy, which is where Ned promised Lyanna to take care of Jon and claimed him as his own. Also present at the Tower was Ned’s good friend Howland Reed. Howland has not yet been seen in the series, but his children, Jojen and Meera have been featured during Bran’s storyline. Perhaps recently and mysteriously cast Ian McShane could be playing Howland. But Carly, you say, why would Howland need to be present in season six? Well, because Howland took the baby girl Lyanna gave birth to and Ned took the baby boy. BOOM! I present to you:

Yes, it is a possibility that Howland’s daughter Meera Reed and Jon Snow are actually twins and Targaryen heirs. 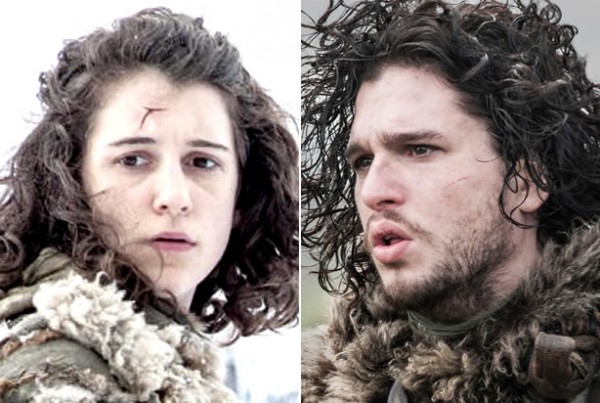 Some fans pointed out that it seems extremely similar to a famous shocking storyline from Star Wars. I have to agree. However, I will reference this interview with Alfie Allen, who plays Theon Greyjoy, for Vulture:

V: What did you ask him [George R.R. Martin] about in return?

AA: You know, I asked him about who Jon Snow’s real parents were, and he told me. I can’t say who, but I can tell you that it involves a bit of a Luke Skywalker situation. It will all come to fruition eventually.

If you enjoyed Carly’s WOOOOOOOOOW piece, you can find the rest of her work right HERE on Sci-Fi Bloggers. You can also follow her on Twitter @MrsCarlyRodgers.