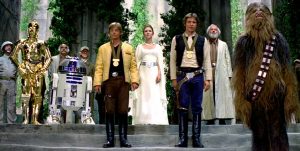 The world is a little chaotic right now, so, while we settle in and stay safe, why not watch something inspirational to lift the spirit? To make you cheer at the screen? There’s nothing like positive science fiction to make us happy and excited for what we might accomplish in the future. And we’ve got 5 of them for you to binge or savor, as you need.

Oh, and don’t worry, these will all be movies that you can probably watch with your children or anyone who is skittish or squeamish.

Yeah, it’s a goofy movie and hasn’t aged perfectly regarding non-American nations, but there’s a reason that the speech from it is so iconic. There’s a reason this is still a movie that people will stop and watch should it come on the television. A lot of movies are about aliens invading and attacking a country, that’s the plot of one of the most famous science fiction books in history, but I can’t think of one that’s more triumphant. That shows humanity getting together to stop a threat, to fight for something good. Seeing those alien ships explode is also just very cathartic.

Of course Pixar is on the list. WALL-E is a science fiction romance story for the ages that manages a great degree of storytelling without any dialogue and shows one of the first hopeful messages I’ve ever seen about global warming and climate change in a movie—for children or otherwise. Though the human characters are not everyone’s favorite part of the story, their recovery of what living is, not just survival, is sure to lift the spirits of anyone watching.

Speaking of survival, The Martian is a movie that not only shows what cooperation and science can do, but what perseverance can accomplish. Though we will hopefully never find ourselves in such a desperate circumstance, this movie will make you believe that even in the most absurdly deadly environments people are capable of incredible things.

This one is a personal choice. And it’s because of one specific scene. I nearly jumped out of my seat and cheered. And, for me, that’s the definition of inspirational. That it lifts you up and makes you feel something powerful. I still get shivers when I remember Captain America standing upon that hill, all alone against an army, and yet still standing there. They chose the perfect person to represent a moral ideal that’s bigger than any country and this is where that fully comes together.

It wouldn’t be a science fiction list without something Star Wars on it, would it? Obviously, this movie is a classic good-versus-evil story and mirrors many other “Heroes Journey” tales, but there’s something about it that makes people dream, doesn’t it? I’ve written so many times on this site about how Star Wars is special, how it flares the imagination, especially in children, in ways that are hard to understand. Carrie Fisher turned the idea of princesses into something powerful. The Force, as a concept, resonates with people. A lightsaber is instantly cool to anyone that sees it wielded. While some movies are inspirational in a way that motivates, Star Wars, right from the very beginning, inspired people to dream, to imagine, to want to be heroes. And though that’s harder to quantify than simply looking at instances of victory and perseverance, it’s no less important.