With hours until the time storms destroy the facility, Cole (played by Aaron Stanford) prepares to go to 1957 to prevent the paradox and undo the storms. However, the storms prevent Jones (played by Barbara Sukowa) from calculating a precise trip.

Ramse (played by Kirk Acevedo) tells Cassandra (played by Amanda Schull) that he has recruited others to take over the facility and use the machine to get to Titan and find the Witness. Cassandra attempts to convince Cole to join her, but when Ramse begins to lead the coup he handcuffs her and prepares to fight. Ramse attempts to appeal to Cole as well, but with only enough time for one jump they resolve to fight for the machine. Cole finds a drunken Deacon (played by Todd Stashwick) pining over Cassandra and sobers him up enough so he can help. Eventually, Ramse and his men take over the machine due to several people betraying Jones, including fellow scientist Dr. Adler (played by Andrew Gillies) who prepares to send Ramse to Titan. They ignore Jone’s pleas and prepare to send Ramse and the men to Titan, but Cole bursts in and shoots Adler. The injury proves nonfatal and Adler prepares the machine while Cole uses the chaos to escape and ask Jennifer (played by Emily Hampshire) and her Daughters for help retaking the machine. 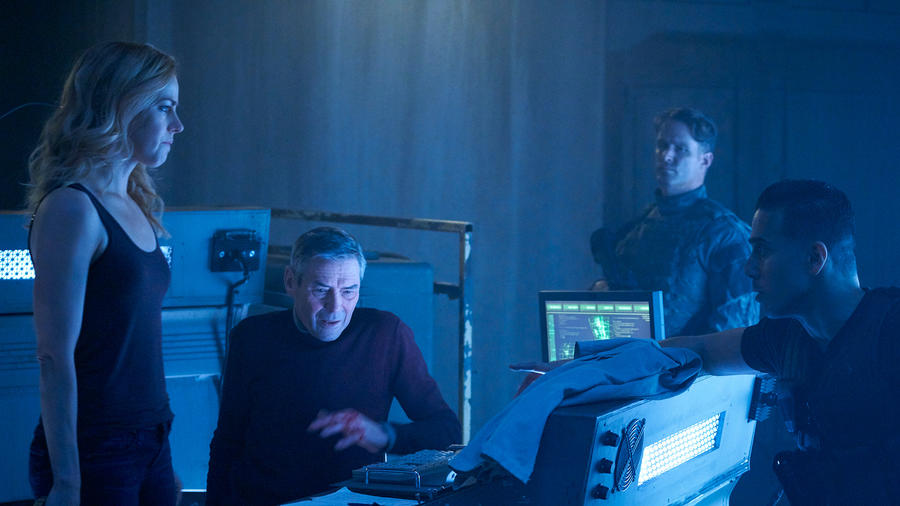 This was a great episode that was packed with action and made use of every character, Deacon drunkenly ranting naked was hilarious and reminds us that he’s just as funny as he is menacing. With every episode Ramse manages to become more unlikeable, and hard to imagine as a character whose mission is to save his son. The once strong relationship between Cole and Ramse has become their biggest weakness; neither can truly hurt the other no matter how often they are on opposite sides. It’s like they’re in a bad relationship but they can’t bring themselves to end it. Having the two factions battling over the machine added drama which made the episode more exciting. Jones ruled over the facility with an iron fist, and it’s not surprising people were put off by that. But it was the fact that it was possibly the last time jump they could ever attempt that made the stakes feel high.

Jennifer agrees to help but only after asking if Cole is willing to lose someone he cares about for the cause. Cole, Jennifer, and the Daughters break into the facility with Deacon’s help and manage to gain control of the machine. Deacon tells Cassandra that he only helped Cole out of spite for her rejection and when Ramse insults him, Deacon tries to shoot him but accidentally hits Jennifer. Hannah (played by Harper Gunn) slashes Deacon across the eye and the Daughters force Cassandra to save Jennifer under threat of death. Cole realizes this is the sacrifice Jennifer meant but when she talks about resurrection it gives him an idea. Cole travels back to 2016 where he left Jennifer at a hotel and brings her to the future. Past and future Jennifer meet and future Jennifer gives her past self the confidence to lead her Daughters. As well as the advice of not being scared to act (future Jennifer refrained from going after the Witness). Future Jennifer dies and past Jennifer takes command of the Daughters and prepares to lead them, Cassandra, and Ramse to take out the Witness. 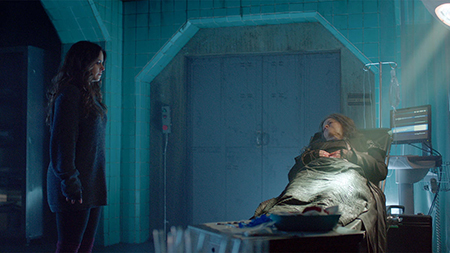 Quality time with herself.

As predicted Deacon is not one to take rejection well, although he just ended up with a mangled eye to match his broken heart. This was another strong episode for Jennifer who showed another layer of vulnerability. When she was younger, having knowledge of the past and future seemed not only helpful but fun for Jennifer, but as she got older it began to take its toll. Knowing all the good and bad outcomes of events left her paralyzed with fear and she chose the safest option which was to do nothing. Watching future Jennifer teaching her past self about her mistakes and how to improve was a powerfully emotional scene. She both ensured the Daughters would have leadership and that her younger self wouldn’t waste their gift. And while charging head-on into the time storms to take on the Witness seems completely insane, Jennifer is the right kind of crazy to pull that off.

Jones sends Cole back to early 1957 to give him enough time to find the Primary before the Messengers ever arrive. Cassandra decides to abandon her mission with Ramse and follows Cole to 1957 just as a storm begins destroying the facility. Jones is trapped in the time chamber and forces Hannah to leave her behind and dies next to the machine. Jones went out in a blaze of glory, although she obviously won’t stay dead for long. Cole and Cassandra will undoubtedly save time which means the finale will be devoted to the showdown with the Witness. But with so much buildup there is added expectation for this showdown to be great and with only two episodes left I’m wondering if there is enough time to do so.

Loved the Die Hard reference, just goes to show you true classics can withstand the test of time.

“Today is the day. One that ends at the beginning and begins at the end.”

It’ll be an adjustment for the Daughters to refer to past Jennifer as “Mother” since she’s younger than them all.