So, Cole and Cassie found the Night Room, but not much good came from it. Each time viewers think they are going to get a satisfying turn of events it is snatched right from the clutches, and hopefully this episode, entitled, “The Red Forest” offers some answers.
Cole returns to the alternate reality where The West Seven has control over the warehouse and the time machine it holds. Dr. Jones has no memory of Cole, and he, quite easily, convinces her that he is able to splinter through time. She already has an answer: something altered the timeline, some event. It appears that in this timeline Cassie didn’t send a message, and Jones has no idea who she is. After a brief search, they learn that Cassie was murdered in 2015, and in her absence the plague was released a year earlier. She is the point of time divergence, and now something called Operation Troy is an item of interest. Cole has to convince the leader of The West Seven to let him go back in time. Turns out that’s Ramse and his new menacing eye patch. As Cole lands in 2015, he enlists, or forcibly kidnaps, Cassie’s former flame Aaron to track Cassie down after the encounter outside the Night Room. 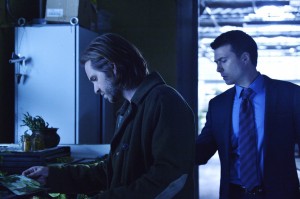 Cole and Aaron search for answers.

When Cole and Aaron fail to retrieve Cassie, she is taken by The Pallid Man and drugged. In her hallucinations she is led by a mysterious woman through a mystical Red Forest. The woman tells Cassie that she is being taken to meet The Witness. Seems as though he’s excited to meet her. Luckily for her, the boys break in and save the day. Cole splinters in front of Aaron, so he finally believes Cassie and is now willing to help her search for the source of the plague.

Cole jumps back to 2043 where Ramse still has his eye and Dr. Jones is in charge. After hearing about the mysterious Operation Troy, Jones decides to look into it. After some light-hearted joking and playful banter between Cole and Ramse, the audience notices that Cole looks like he’s in tough shape. Jones looks at him with pitiful eyes and explains what we had all been thinking. He can’t do this forever. With each jump he comes closer to death, and he doesn’t have many more in him. The last few must be worth it. 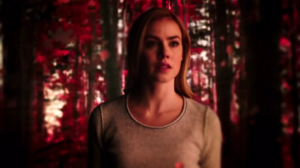 Cassie in the Red Forest.

So we received no answers and instead uncovered new mysteries. Who is this strange woman? What’s the Red Forest? What happened during Operation Troy? When do we get to see monkeys? 12 Monkeys is on Syfy every Friday at 9/8 c.

If you enjoyed Carly’s trip through time, you can find the rest of her work right HERE on Sci-Fi Bloggers. You can also follow her on Twitter @MrsCarlyRodgers.