This week’s episode, entitled “Mentally Divergent,” attempted to begin viewers on the path that will explain just who Leland Goines was and who the Army of the 12 Monkeys are.

In Cole’s story we met two very different characters. Ramse is Cole’s best friend in the year 2043 and the banter between them provides comic relief from the show’s tense atmosphere. There are jokes about Cole going back in time and finding Ramse’s mother to conceive Ramse himself. See? All in good fun. 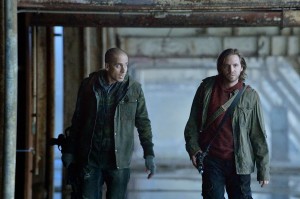 Actually, the real fun is Emily Hampshire’s character, Jennifer Goines. Jennifer is Leland’s daughter who resides in a mental hospital in 2015. Goines’ lines could be interpreted as humorous on paper, but watching her act is simply unnerving. She’s twitchy and blurts out things that don’t make sense, but you pick up on clues that she knows a lot more than she lets on, but it’s buried deep within a bruised psyche. Cole is going to have his work cut out for him.

After witnessing Goines’ murder, Dr. Cassie Railly is playing it safe and hiding in an old bookstore with the help of her ex, Aaron. She intends to visit her former NSA friend who has been helping her investigate only to discover that he’s been murdered and covered in flowers. Good thing the murderer stuck around, because it’s the legendary Tom Noonan, who can play creepy like nobody’s business! In fact, his official character’s name? The Pallid Man. Did you get chills? Anyway, he tells Cassie to stop snooping. 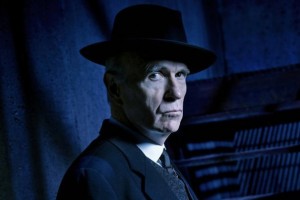 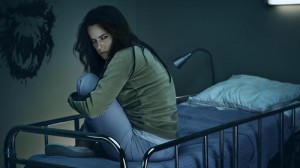 It turns out that Jennifer has also seen The Pallid Man. He broke into her father’s lab and murdered her colleagues in front of her, thus leading to her scattered mental state. Jennifer knows where the Night Room is in her father’s lab and Cole and Cassie speculate that this is where the virus is contained. Before they are able to learn more, Jennifer is kidnapped from the asylum by The Pallid Man, who smells of jasmine and lavendar.

Going through Jennifer’s admittance forms, they realize that one of the scientists from the lab also escaped. Cassie and Cole must find the scientist to get to Jennifer and the Night Room.

The pacing remains strong and the more characters I see, the more excited I get. The mystery is still drawing me in and I was impressed with the artful direction of the episode and I’m intrigued with how some of the small bits and pieces throughout the episode will play out in the grand scheme of things. You can check out 12 Monkeys on Syfy at 9/8c on Fridays.

If you enjoyed Carly’s trip through time, you can find the rest of her work right HERE on Sci-Fi Bloggers. You can also follow her on Twitter @MrsCarlyRodgers.