The Pallid Man (played by Tom Noonan) goes to a mental hospital searching for Jennifer (played by ) who calls him and reveals she escaped with several female inmates. Naming themselves Hyenas (the natural enemy of the monkey), she promises to hunt him down.

In the future, the temporal storms are aging people and causing chaos and Jones (played by Barbara Sukowa) attempts to find the last Primary they need to save. Cole (played by Aaron Stanford) goes to Jennifer for information on the Primary and she tells him the Pallid Man in the year 2016 knows. He travels there and finds Jennifer and the Hyenas at their compound and asks for help finding the Pallid Man. Cole, Jennifer and the Hyenas find Oliver Peters (played by Ramon de Ocampo) who helped engineer the virus but wants to create a vaccine as redemption and use him as bait for the Pallid Man. In the future, Jones tries to get to know her daughter, Hannah (played by Harper Gunn), but finds it difficult to connect after decades apart. Cassandra (played by Amanda Schull) and Ramse (played by Kirk Acevedo) attempt to locate and assassinate the Witness. Hannah directs them to the House of Truth to find the Keeper (played by Christopher Heyerdahl) for answers but they’re captured at gunpoint upon arrival. Obsessed with truth because government lies kept people from saving themselves during the outbreak, he hooks them to a machine and tortures them whenever it indicates they lie. 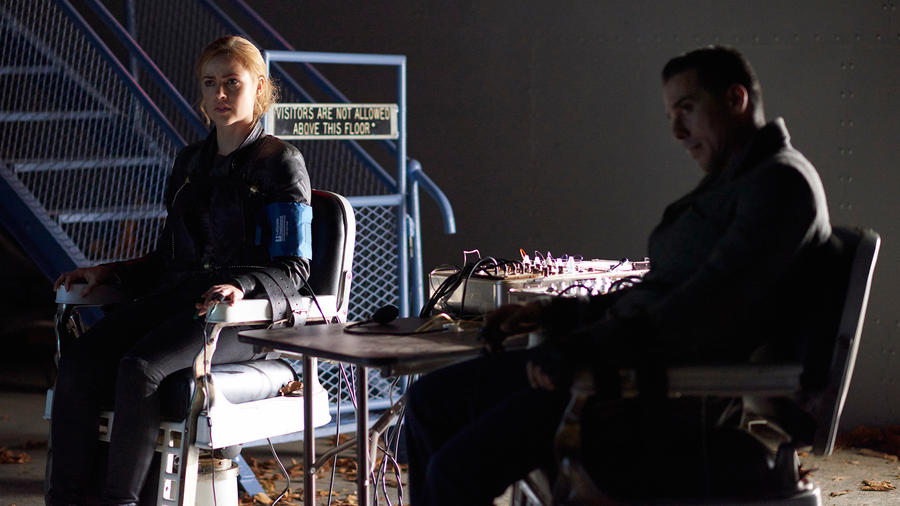 The truth shall set them free.

Before she had the Daughters, Jennifer ran a pack of Hyenas; the opening scene of her recruiting psych patients for her army indicated this would be a fun episode and it didn’t disappoint. With her new warrior woman persona, Jennifer was the embodiment of Sarah Connor from Terminator 2: Judgement Day. Jennifer chose these women because she feels they’re similar but Jennifer is crazy like a fox. These ladies have real psychological problems and those kind of people don’t make for great soldiers. While brief the scenes between Jennifer and Hannah were full of emotional tension, both seem to want to connect with the other but they are essentially strangers. The Keeper storyline could have fallen flat but turned out to be an unexpected highlight of the episode. He’s reminiscent of sci-fi characters like Brain from Escape from New York: quirky, maybe a little crazy, but fun to watch. Cassandra and Ramse being forced to reveal the truth behind their hatred for each other adds a new obstacle to their mission. Now more than ever they don’t trust each other and that will have disastrous consequences if/when they confront the Witness together.

When the Hyenas reveal they’re plan to kill the Pallid Man and warn the world about the virus Cole objects because of the mass panic it’ll cause. When one girl, Vanessa (played by Eve Harlow), pulls a gun on Cole, Jennifer intervenes and Vanessa turns the rest of the Hyenas against Cole and Jennifer. Cole and Jennifer get to the Pallid Man first and Cole beats him for information about the Primary and eventually gives in and tells them the Primary was killed in 1957 in upstate New York. Unable to kill the Pallid Man, Vanessa forces Oliver to give a press conference about the virus but Cole an Jennifer learn the Pallid Man planted a bomb in the building which kills Vanessa, Oliver and everyone else inside. The Pallid Man’s bodyguard arrives and in the ensuing shootout they both escape. In the future, the Keeper gives Cassandra and Ramse the location of Titan, a city where the Witness is believed to be, and they head out. 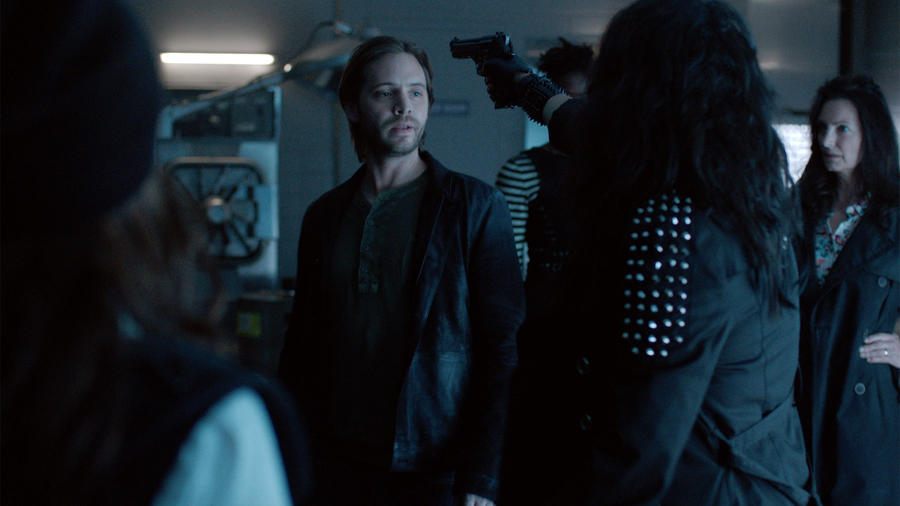 Now we know why Jennifer’s future group are called Daughters, Hyenas are too wild and unpredictable to control. Cole would have (and should have) ended up killing the Pallid Man anyway once he got the information he needed, but these Hyenas were very biased against men (why?) and wouldn’t have listened anyway. You would think instead of press conferences Oliver would have been put to better use developing a vaccine but you can’t argue with crazy women. The Daughters seem more mentally stable so Jennifer must have only recruited relatively sane women in the future. This episode was a great showcase for Jennifer because in addition to her scene-stealing quirkiness it portrayed a wide array of emotional range. She went from being the cocky leader of a group of fighters to a shattered and failed leader upon their demise. Cassandra and Ramse get what they need after playing 20 Questions, if only all information was that easy to get.

Jennifer is guilt-ridden over the deaths of the Hyenas but Cole assures her it wasn’t her fault before splintering to the future only to reappear seconds later. Hannah and Jones begin to bond as Jones tells Hannah about her father and Hannah reveals Jennifer renamed her Zeit (German for time). Meanwhile, the Pallid Man is shown coercing Jones’s husband into working on a project codenamed Titan. Overall this was a strong episode of 12 Monkeys and in general the season has been pretty enjoyable. Recently the showrunners have teased that a major character death and a twist ending are coming in the season finale. With the show getting more interesting, hopefully it won’t be canceled on a cliffhanger like so many sci-fi shows before it.

“They’re like me, they’re just misunderstood. I freed them, I feed them and now I lead them.”

The Pallid Man was called Tall Man a couple of times, which is it and when will we find out his actual name?

“This is a new level of crazy.” “Crazy is as crazy does and this crazy is getting shit done.”

I think Jones’ husband is still alive. How lucky she would be to get her daughter and husband back.