We’re starting to get into the meat of things. Not the plot or the plague really, but at least we’re learning something about Cole and Ramse. “Atari” starts with Cassie and Cole amidst her crazy board of typical red yarn and strange black and white photos. She’s narrowed down the possibilities of the Night Room, but she’s warming up to the idea of killing the Army of the 12 Monkeys since it means that the lives of seven billion people will be saved. However, she’s still a little irked that she doesn’t know much of anything about Cole.

Cue to 2032 where Cole and Ramse are starved and tired in an empty world. When a dog crosses their path, Cole hesitates to pull the trigger and Ramse insists that the rule is, “If you see it, you kill it.” The two bicker over the silly rule, and don’t kill the dog despite their overwhelming hunger. Turns out that in 2043 The West Seven have found the base where the Cole travels through time and they want in. 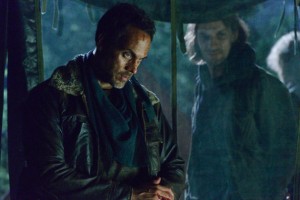 Deacon (Todd Stashwick) is all sorts of mean

Back in 2032, after hanging by a fire with the dog, Cole and Ramse have their first run-in with The West Seven and leader Deacon (played by Todd Stashwick). Turns out the group got their name after Deacon slaughtered all survivors at the West Seven quarantine zone. There were women, doctors, nurses, and children. So, yeah, he seems nice. In hopes of food and shelter, Cole and Ramse join him. Not surprisingly, the relationship between the guys and the group ended poorly, because now Deacon is attempting to take over the base. When Jones, lead scientist, discovers the severity of the attack, she tells Cole that the only thing that matters is the time machine. She attempts to send him to 2015 permanently, so he can stop all of it. Cole splinters just as Deacon and his crew break in. 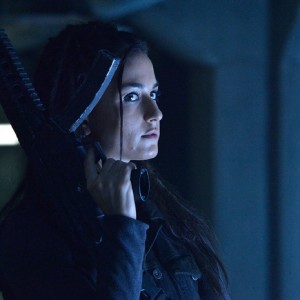 Except he didn’t go back to 2015, but just a few days earlier. Just in time to run into his old girlfriend, Max, and be captured and tortured. Turns out he revealed the system of tunnels leading to the base, but in order to change the outcome of the events he needs help from Max. Looks like she still has a soft spot for him, because she helps him save Ramse and Jones. Unfortunately, Max hesitates to kill Deacon, and he escapes. Max joins the group and afterward Cole returns to 2015 to tell Cassie more about himself. Do you smell a love triangle? Turns out Cassie has been busy, too. According to a scribbled red circle on the board…Cassie has located the Night Room.

If you enjoyed Carly’s time hopping, you can find the rest of her work right HERE on Sci-Fi Bloggers. You can also follow her on Twitter @MrsCarlyRodgers.