The premise is simple enough:

If you had the chance to change history, would you?

Hulu’s newest miniseries 11.22.63 is based on the novel of the same name by horror aficionado Stephen King. The show introduces James Franco as Jake Epping, a teacher who is struggling through the harsh realities of life. In the first few minutes Epping is thrown curveball after curveball but it doesn’t fly by too fast and in fact Franco is truly fantastic. The title alludes to the infamous day when American President John F. Kennedy was murdered in Dallas, Texas and Epping is tossed back in time to change that fateful day.

Epping is launched back to 1960 with the help of his friend Al, played by the captivating Chris Cooper. This is where things get a little twisted. Cooper is incredible to watch and even alongside Franco’s performance he’s a standout, but the science behind the time travel is sketchy. Perhaps as a science fiction fan you’ll have to stunt your curiosity and just know that it works. The rules for travel are laid out quite specifically though and the big news is that when you mess with the past then “the past f***s with you.” It’s within these parameters where the conflict will lie. 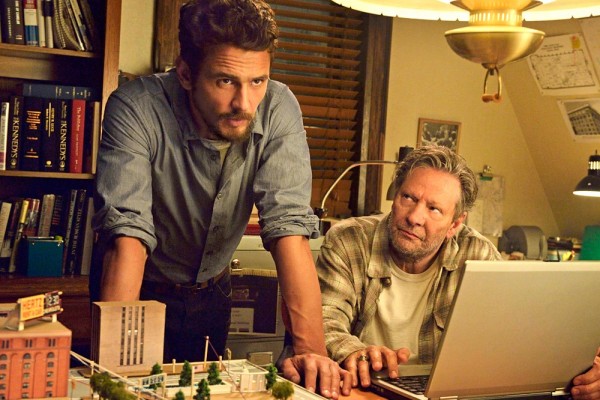 Yes, Epping will live within the 60s and come into contact with major players like the curios Lee Harvey Oswald, but he also gets caught up with the past and present. His crumbling life in the present is a distant memory to his new life in the past and Epping may reject the idea of going back. The episode is paced nicely and does a nice job of laying out the plans for the series without giving too much away.

Hulu will air the series exclusively beginning on February 15th. You can check out the first episode here and the other seven episodes as they are released.

If you enjoyed Carly’s…huh…that’s actually just a very interesting show…uh, you can find the rest of her work right HERE on Sci-Fi Bloggers. You can also follow her on Twitter @MrsCarlyRodgers.